I’m dreaming of an Icy Christmas

Luckily, here in the New North End of Burlington, we had no power outages with the ice storm that left almost 1/2 an inch of ice over everything…

The first day of the storm, we had an unexpected trip up to Montreal to see Cirque du Soleil’s VAREKAI show at the Bell Center.

We drove up, taking 2 hours each way to get from the Highgate border crossing to Montreal, mostly due to freezing windshield wipers, but made it there & back with summer tires & wipers without going off the road.
I blame this scary looking Canadian sign guy for the weather: 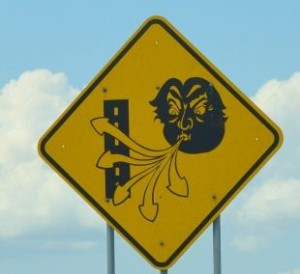 When the iciness finally stopped on the 23rd of December, we emerged from hibernating to uncover the car and clear the parking spaces… see a picture of a frozen hummingbird I took mid-ice breaking: 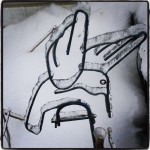 And 90 minutes of ice clearing & then car warming later, a Christmas themed selfie was taken for a ShopChurchStreet Instagram contest: 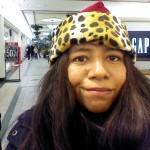 On Christmas eve, we noticed we should clear the steps to our house of the ice and snow that had accumulated.
Taking a cue from a Facebook friend, Jeremy took a mallet to the steps, and within no time they looked almost clear, but then one last wack of the mallet broke the last of the ice, but also snapped the screws holding the middle step in place.

An impromptu trip to Lowes in South Burlington, and $8 worth of 3″ screws later, the step was secure.

The joys of winter weather did not stop there, on Christmas day, our family gathered for lunch in Swanton, to a balmy 9 degree high temperature, but at least the sun was out: 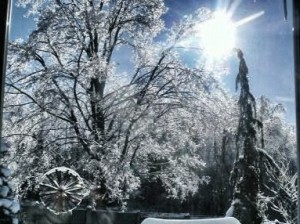 After a wonderful meal & enjoying past TV episodes of The Wild, Wild, West, we meandered back to Burlington, to hope for warmer weather to melt some of the ice from the storm.

But the temperatures only rose above freezing for 1 day, which I quickly scurried to remove all the brine and salt off the car from the aformentioned Montreal trip, then went back home to hibernate, with a quick trip to see the Ethan Allen Park igloo that had sprung up:

A day or two later, with cold temperatures still below 32 degrees, I ventured out for errands and supplies, only to find the driver door’s lock frozen, (and would remain that way for the next week). Luckily, the passenger door was able to be unlocked, and fortunately the recent stretching with our daily exercise regimen had helped my flexibility to be able to get to the driver’s side, kind of like the picture below, but with winter gear on & a not so happy look on the face… 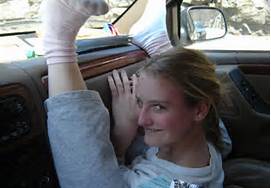 Although cold, fortunately the weather cooperated for our New Year’s eve outing to our favorite Grand Buffet in South Burlington, and The Hobbit: Desolation of Smaug at Essex Cinema‘s TRex theater. As the night went on, we decided to head back home as the weather was changing back and forth between snow and sleet.

A new year, but still no warmth

The first day of 2014 were spent in complete hibernation in our house, not due to a hangover from partying too hard, but due to the below zero cold.
The second day of 2014, I ventured out first to check mail, then to run errands and get groceries in below zero weather. Surprisingly I made it downtown and to Shelburne Road with the only slippery spot going up College Street hill.

The third day of 2014 was spent in total hibernation at home;

The fourth day of 2014 involved another dreaded trip to the mailbox, and the usual 5 minute ordeal of taking the mallet and screwdriver to break up the ice on the doorframe.

Finally, on this the fifth day of 2014, we are happy to see the temperature above 32 degrees again, even though there is a Winter weather advisory until Monday morning, with sleet or rain likely.

That’s enough about the weather, now to recap 2013…

This past year, I’ve taken a few good pictures, crossed an item off my bucket list (became a runway model for a night in July): 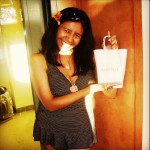 drove through an ice storm to Montreal and back, and have lived to tell about it.