Not one person in the audience spoke up in favor of the ordinance, (note, they had to move the meeting to Contois auditorium last minute, as the Conference Room #12 was not large enough to hold the crowd of about 30-40 people who all were against the measure.)
The presence of the crowd definately surprised the Councilors of the committee and City Attorney Joe McNeil.

One person even expressed their freedom of speech by wearing a red tape gag over their mouth.

John Briggs of the Free Press was there as well, so there may very well be an article of this in tomorrow’s Free Press.

Thanks for subscribing to my feed!
I always welcome comments, so please… feel free! 😉
January 30, 2006

Towards the beginning of the month, there was mention of a possible ordinance being enacted by the City to prevent, or make it hard to start a public assembly on Church Street:
City of the banned? – Vermont Guardian 1/6/6

Due to the huge public outcry against the ordinance even being discussed, Peter (a.k.a. Mayor Clavelle) issued the following statement in his 1/13/6 Friday letter:

The early draft of a parade and public assembly ordinance, which was referred to the City Council Ordinance Committee on December 19, has already generated considerable controversy. This ordinance was first requested several years ago by the Police Department and the Marketplace, and has been discussed by various departments for quite some time. The intent is certainly not to restrict public demonstrations or to stifle free speech. Rather, the ordinance is primarily about parades, festivals, and other major events. It is intended to clarify the situations in which a permit is needed, the reasons for granting and denying permits, and other ground rules to that allow the City to balance the competing needs involving the use of streets, sidewalks and parks, and to address the costs and other impacts on city department resulting from these activities in a way that is constitutional and not cost prohibitive. I can assure citizens that any recommendations from City departments that are overly restrictive will be reversed prior to the ordinance’s adoption. The entire proposed ordinance will be reviewed by the City Council Ordinance Committee and the City Attorney’s Office will continue to review case law and ordinances from around the country. There will be ample opportunity for public discussion before any ordinance is adopted. The ordinance as currently drafted will not be enacted.

Now, just over the weekend, I receive an email from one of my councilors, saying the proposed ordinance is scheduled to be discussed at the City Council’s Ordinance Committee meeting, under the title of “Parade” ordinance.
Seeing as Peter says there willl be ample opportunity for public discussion, I am thinking the opposing view to the ordinance should be heard at the first Ordinance meeting to let them know how we feel about it.
The meeting info & agenda are below:

(Corner of Church and Main Streets)

a. Continuation of Residential Districts

b. Mixed Use Districts

Thanks for subscribing to my feed!
I always welcome comments, so please… feel free! 😉
January 27, 2006

Yesterday afternoon, the mock election was held for the Burlington Mayor’s race.
It was a test-run of the new Instant Run-off Voting system that was passed by Burlington voters last year.

Ironically, there was a software glitch, and the results of the mock candidates were delayed.
A fictitious Libertarian, Herbert Mickleson, was among the mock candidates, earning 11 votes!
For more info about Libertarianism, feel free to visit the Burlington Libertarian party’s website, listed in my links to the right.

Hopefully the Town Meeting Day’s election results work better for less stress on the election officials, and faster results for the public.

For more info on IRV, check out the website the city has set up specifically for it, (especially since they’ve spent about $10,000 for increased awareness of IRV):
http://www.burlingtonvotes.org

Thanks for subscribing to my feed!
I always welcome comments, so please… feel free! 😉
January 27, 2006

Welcome to my blog! 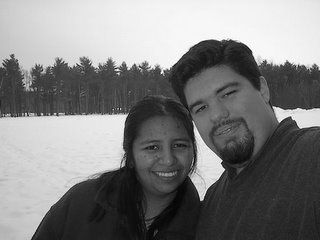 My name’s Heavenly, as pictured on the left, and I’m standing beside my wonderful husband of 3 years, Jeremy.

We’re Libertarians, and founders of the Burlington Libertarian party.

I’ve started this blog as a type of commentary of things that occur in Burlington… enjoy & thanks for dropping by!